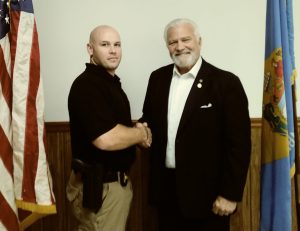 New Castle County Police Officer First Class Nicholas Hurst, who has been recognized for his work with fellow military veteran police officers through the Veterans Response Team (VRT) has been appointed New Castle County co-representative for the Delaware Veterans Coalition at the Coalition’s bi-monthly meeting in Dover on September 24.

“We are very pleased to have Nick come aboard. He will serve with long-time member Tom Daws of Newark. These men create a span of service and shared values from Vietnam to our current conflicts and will help us to better connect with our fellow veterans,” said Dave Skocik, president of the Delaware Veterans Coalition.

Officer Hurst, a former Marine who served two combat tours in Falujah, Iraq, explained how the VRT works with the Green Alert Bill, which was signed into law on August 29 by Gov. John Carney. The Green Alert program aids in locating missing members of the armed forces, including veterans, who have a physical or mental health condition related to their service. The law is modeled after Delaware’s existing Gold, Amber, and Blue Alert Programs.

The Veterans Response Team complements the already existing New Castle Police Department’s Crisis Intervention Team by providing officers who have served in the military with an extra tool in reaching fellow veterans in need. Officer Hurst was one of four New Castle County police officers who attended veterans response training in North Carolina and shared their training with local agencies, including the Wilmington Police Department, the U.S. Department of Veterans Affairs Police Service in Elsmere, and the Delaware State Police.

The Delaware Veterans Coalition is a non-profit, nonpartisan organization created in May 2011 to advocate with Delaware elected officials on issues that affect all generations of First State veterans. All honorably-discharged Delaware veterans are eligible to join.

Visit www.DelawareVeteransCoalition.com for more information or to download a membership application.