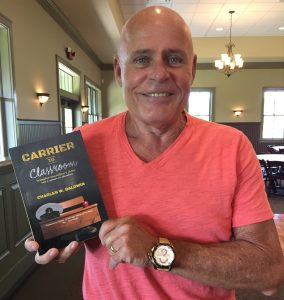 Carrier to Classroom: transferring military skills into a career in education

He served as the top enlisted man on a 5,500 sailor nuclear powered aircraft carrier, serving as the key enlisted leader and manager for the ship’s captain. He would later build and lead his own charter school.

It wasn’t long after his 1968 high school graduation that Charles “Chuck” Baldwin walked into the Navy recruiter’s office.

Beginning with basic training at Great Lakes Naval Station near Chicago, the Navy taught him that initiative and willingness to learn translates to rank and greater responsibility. It’s a lesson held close to his heart during 25 years of service.

His journey up the chain of command to chief petty officer, master chief, command master chief of CVN 69 USS Dwight D. Eisenhower, and one of the finalist candidates for Master Chief Petty Officer of the Navy, is a testament to his leadership and management skills.

Fewer than two percent reach the Navy’s top enlisted rank. Only a small percentage of those reach leadership at the command level, and fewer still are considered for the highest enlisted role in the entire Navy. The Navy’s reliance on its chiefs was summed up in the September 2005 exhortation by Admiral Mike Mullen, Chief of Naval Operations, in the Navy Times, “Chiefs, Run the Navy.”

Still in his early 40s after a successful career, Baldwin looked forward to creating a second career on land. After leaving the Navy in 1993, his decision to continue teaching led to his hiring as an ROTC instructor, later serving as a public school principal.

Within 10 years he decided to build and lead his own school and served as commandant of Delaware’s first military affiliated public charter school, the Delaware Military Academy. Not in an existing building — but in a new, dedicated school, which required raising $12 million, establishing a curriculum and hiring instructors, many of whom were military veterans. Today the school is thriving with a long waiting list of applicants.

Baldwin later served as president of the Charter School of Wilmington, one of the first independently operated public schools in the United States, established in 1996 with a focus on mathematics and science until his retirement in 2013. He was most recently instrumental in the 2015 creation of the First State Military Academy in Clayton, Del., which is affiliated with the U.S. Marine Corps.

His book, based on his Navy and educational experience and a master’s degree in school leadership and instruction, is geared to the veteran wanting to become a classroom teacher, whether in the private or public sector. Its 10 Deckplate Leadership (DPL) lessons not only apply to schools but to the corporate world as well.

He also serves as a member of the Delaware Commission of Veterans Affairs and is a board member of the Friends of Delaware Veterans, Inc., the official fundraising organization of the Delaware Veterans Trust Fund. The Trust Fund was created to assist honorably-discharged veterans of all generations in financial emergency. It provides a one-time, hand up for veterans residing in Delaware.

In a remarkable continuation of his career-long leadership, Baldwin is donating the proceeds of “Carrier to Classroom,” to the Veterans Trust Fund.

The $15 paperback version can be ordered online at www.carriertoclassroom.com through Lulu Publishing and will also soon be available on Amazon.com.