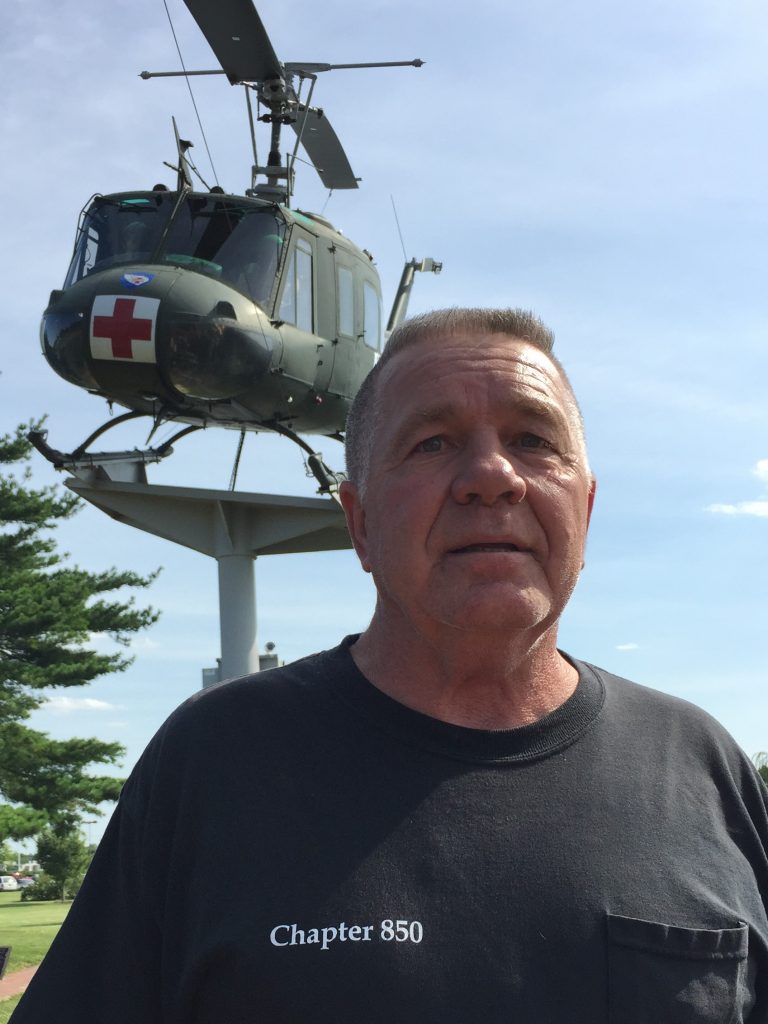 Joe Startt Jr, in front of a Dustoff Huey helicopter bearing the 45th Medical Company patch similar to the one that saved his life in Vietnam. Photo by Dave Skocik.

“That others may live,” was the slogan of the UH-1 Dustoff helicopter crews who flew into firefights to rescue the wounded in Vietnam. That slogan and heroism has been passed down to today’s medical evacuation crews who serve in harm’s way across the globe.

The Vietnam Dustoff Association is coming to Dover for their September 21-23 national convention. They will hosted by Kent County Chapter 850, Vietnam Veterans of America.

They have special meaning to Joe Startt Jr., Chapter 850 president, who will never forget his own lifesaving ride after being wounded in Vietnam in 1969.

“I remember being told to hold on, help was on the way. In less than 15 minutes the ‘whop, whop, whop’ was like an angel’s voice telling me I’d survive. The UH-1 Huey on display at the Kent County Veterans Memorial Park serves as an ongoing reminder of their heroism,” he said.

Paul Davis, vice president of Chapter 850, worked for two years with the federal government and even the White House to secure the helicopter. That was followed by a road trip caravan to Florida by Joe Startt and other members of the chapter to pick it up with the help of a trucking company sympathetic to veterans.
One of the highlights will be a Friday, September 22, 7 p.m., dinner hosted by the chapter at the Modern Maturity Center and followed by several events the next day.

Saturday’s agenda will include a special 10 a.m. ceremony at the Kent County Veterans Memorial Park on S. Little Creek Road in Dover where crew members will be honored, followed by lunch at the Dover AFB dining facility where the Dustoff crews with be greeted by representatives of the 436th Airlift wing and some of today’s airmen. A special tour of the AMC Museum will follow.

“These men, several thousand of whom paid the ultimate price saving lives in Vietnam,” are our brothers who traded their tomorrow for our today,” said Mr. Startt. “We will always honor and revere them.”
The $35 plated dinner will be open to the public on a first-come first-served basis. The cutoff date is September 15. “Sponsorships are also available to help with the costs of honoring these heroes,” said Paul Davis, VVA State Council president. For tickets or sponsorship opportunities, call 302-697-8384 or email pauldavis5322@comcast.net.